W is for Windy City 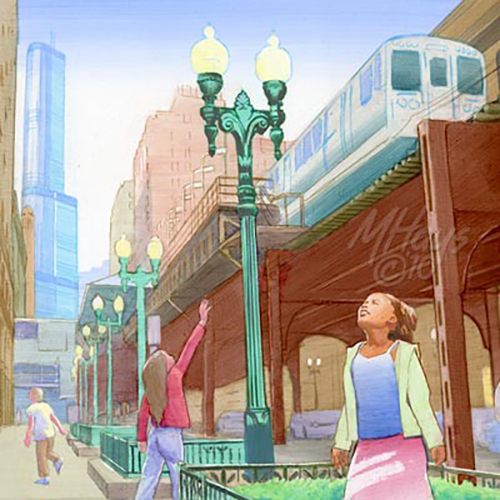 W is for Windy City

Welcome to the Windy City—America’s beloved Chicago! Open the pages and experience the wonders of the largest city in Illinois. From the visuals at the Art Institute to traveling the Loop on the “El” train, the opportunities are endless. You may want to read your way through the libraries, look upward to the city’s skyscrapers, stroll down Navy Pier and finish with two zoological gems. Poetry introduces each letter topic, followed by littleknown facts and in-depth details:

Buckingham Memorial Fountain majestically lit in the dark
is the centerpiece of a well-known P, Chicago’s beloved Grant Park.

Proudly referred to as Chicago’s “front yard,” Grant Park is among the city’s loveliest and most prominent parks. The park was named for Ulysses S. Grant, 18th president of the United States. The site of three worldclass museums—the Art Institute, the Field Museum, and the Shedd Aquarium—the park, which covers about 300 acres, hosts many notable concerts and events.

Whether you are a Chicagoan or a visitor and wherever your interests lie, W is for Windy City will leave you not only entertained, but also with a great appreciation for all that this dynamic city has to offer.